With the shutdown of the Line 5 oil pipelines in sight, past and present FLOW Board Chairs take note of this moment in history, and recognize the results of your commitment in supporting FLOW’s public trust work. Take heart in how far we’ve come and celebrate in the fact that your gifts to FLOW matter, in the past, now, and in the future. From the bottom of our hearts and the bottomlands of your Great Lakes, we thank you for supporting FLOW.

A message from Mike Vickery, who joined FLOW’s Board in 2016 and currently serves as Board Chair: 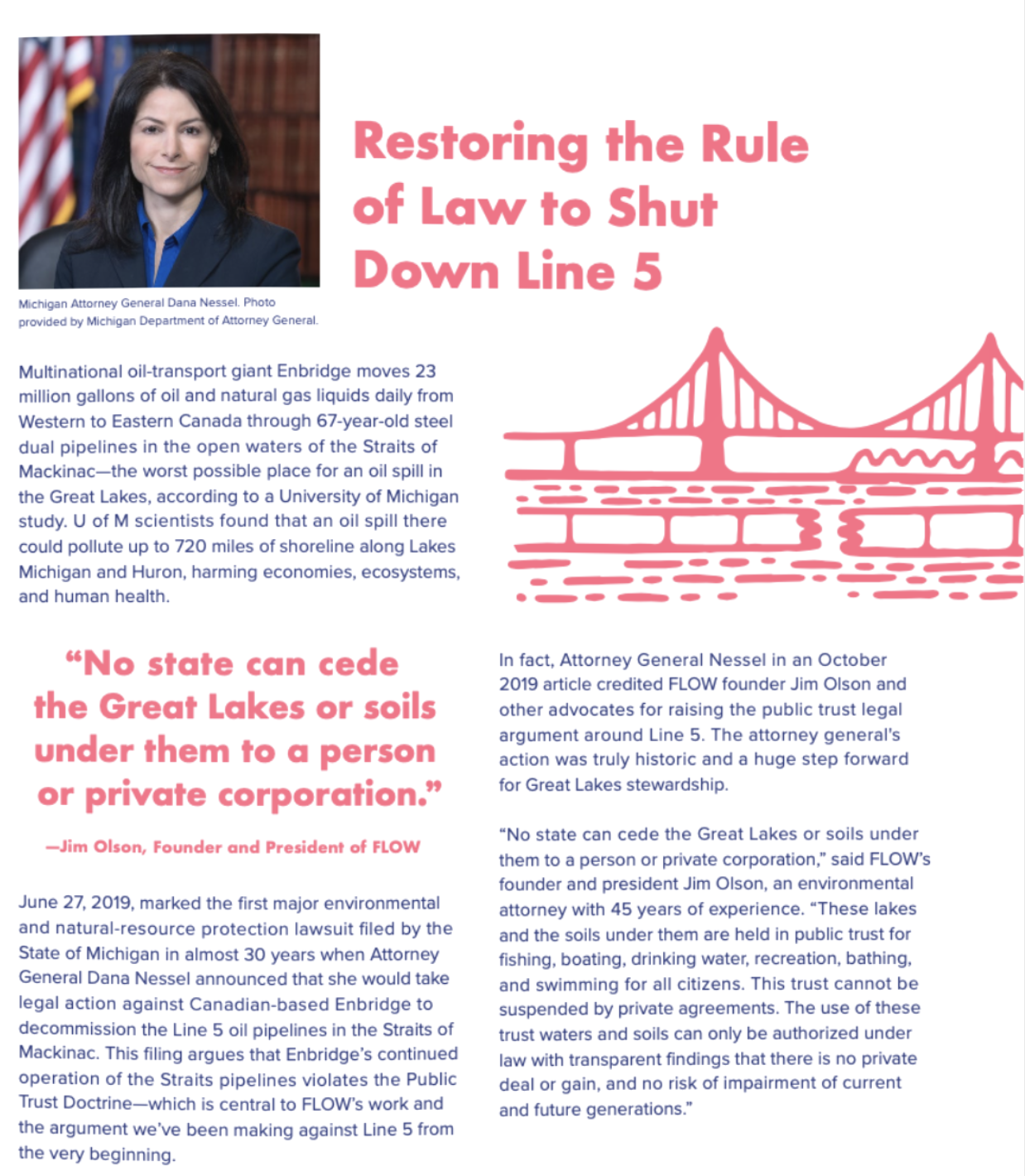 FLOW’s supporters should not just be celebrating, but be celebrated!  The action announced Nov. 13 by the State of Michigan to begin shutting down Line 5 in the Straits of Mackinac under public trust law is a momentous event in the struggle to protect Great Lakes water.  Credit for the action is being claimed by many, as it should be. But our donors and supporters should know that FLOW’s influence in bringing “public trust” to the center of this Line 5 story is of singular importance.  This is an unprecedented moment of success for the Great Lakes, for FLOW—and for you.

Right image: Our Line 5 program page from our 2019 Annual Report.

The action taken by the State of Michigan is a direct return on your support of FLOW’s work.  FLOW is invested in the principles of the public trust doctrine, and we are playing the long game to protect water for future generations.  This is exactly why we value and depend on your trust in FLOW and why we need your relentlessly loving devotion to this generational responsibility.  As great as this moment is, rest assured that we know that the Line 5 story and the larger struggle to protect fresh water are not done.  And neither are we.

Please continue to be relentless in supporting FLOW and in sharing this good news about Line 5, about the power of the public trust doctrine, and about our common goal of being good ancestors.  We do this for love of water, of home, and of those who come after us.

Giving does have great consequences.

Watch a video of Mike Vickery narrating how FLOW is playing the long game to protect water for future generations. 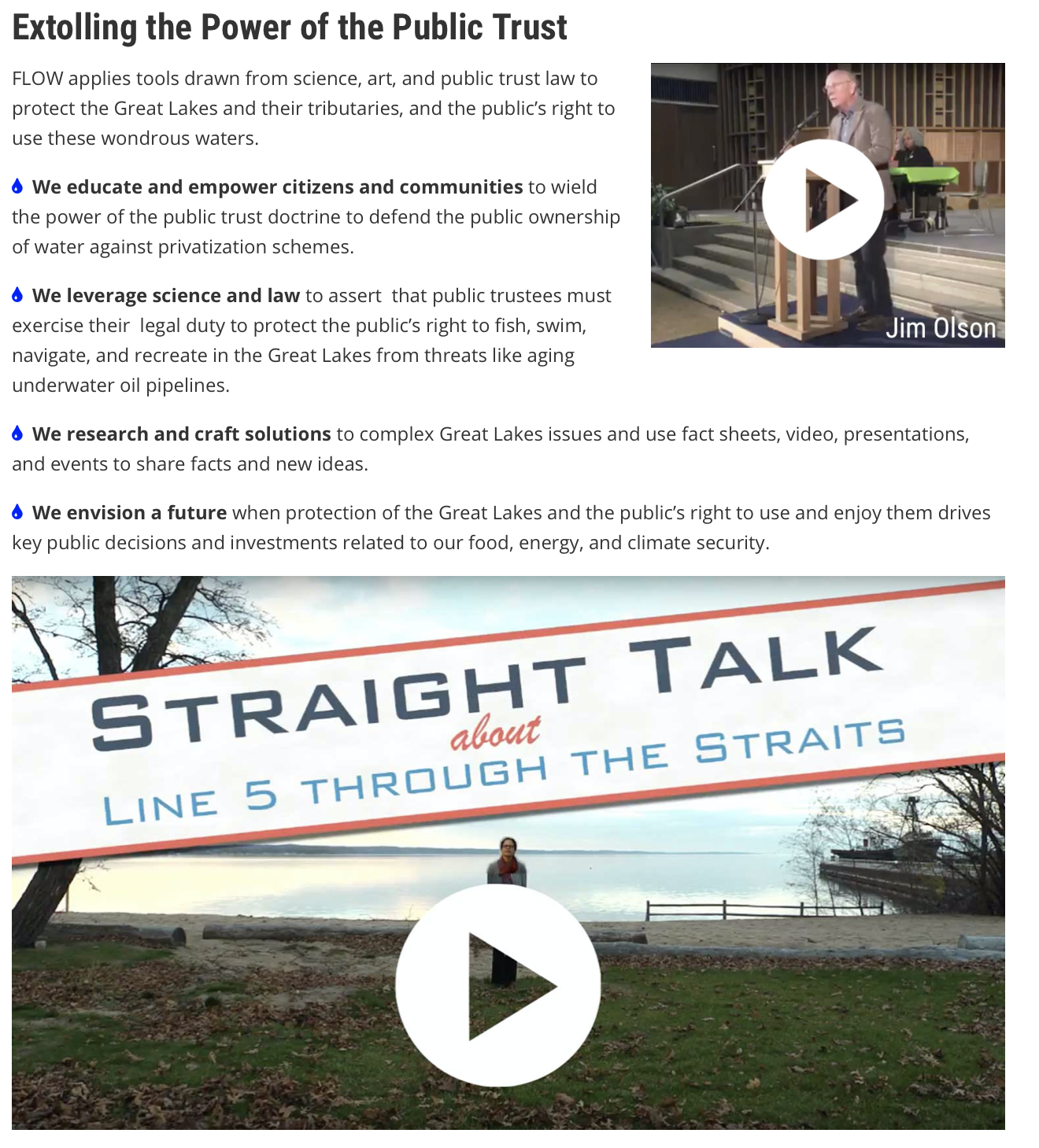 Everyone who has supported the mission of FLOW and its work has cause to celebrate the recent action taken by Governor Whitmer and Attorney General Nessel.  Central to its mission, FLOW has advocated for broad application of the Public Trust Doctrine to assert public ownership of Great Lakes waters, protect our waters from harm and degradation, and promote the public trust as a framework for managing the world’s most magnificent and invaluable freshwater seas.

Left image: Watch our 2015 videos on “Extolling the Power of the Public Trust” and “Straight Talk about Line 5 Through the Straits”

Both the Governor and the Attorney General have embraced the Public Trust Doctrine as the core legal principle to avert the threat of a catastrophic failure of Line 5.  Your investment in FLOW and its work continues to yield measurable public benefits—adoption of legal principles and public policies that will help safeguard our environment for future generations.

But there is much work left to be done.  In fact, we are only beginning.  FLOW has drafted comprehensive legislation to improve water infrastructure and address water inequities.  We are working with the state experts to understand the challenges of protecting groundwater resources and addressing legacy pollution.  Just as important, we are advancing the Public Trust Doctrine as an effective strategy to address the existential threat of climate change.

Thank you for your support. 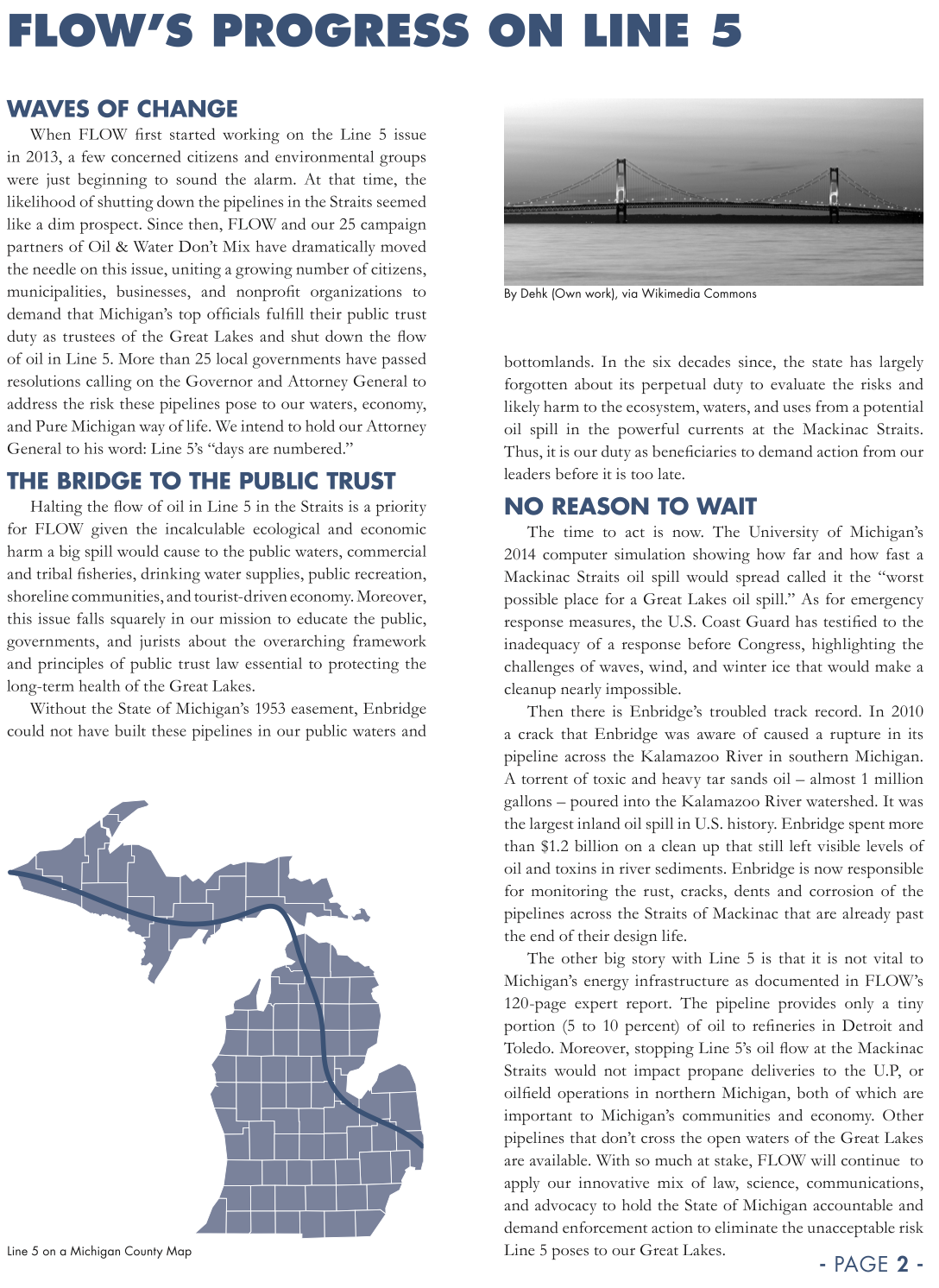 Jim Olson and I took the lawyer’s oath on December 9, 1971, and were sworn in as members of the Michigan State Bar. Over the last 49 years, I have had the honor of occasionally carrying Jim’s briefcase through several serious environmental litigation battles, many centering on advocating the Public Trust Doctrine. Jim has always advocated with the goal of advancing the greater good, advancing the public’s interest versus a private interest. Today, while those battles continue, we have the right to  applaud Jim, as FLOW’s founder and legal advisor, and the entire FLOW staff, who have worked tirelessly to advance the Public Trust Doctrine, now recognized by the State of Michigan, our Governor, and our Attorney General with their enlightened decision to shut down Line 5 by May 2021 to preserve our Great Lakes for future generations.

After 49 years of tireless effort, Jim has earned the honor of being one of the nation’s leading proponents and advocates of the Public Trust Doctrine. But as well, his work and the work of FLOW would not have been possible without your support—support from its beginning in 2011.  We applaud you.  As FLOW approaches its 10th anniversary, it’s time for all of us together to celebrate. With your continuing help and involvement, 2021 will be a great year. Thank you for everything you have done and do for FLOW and the Great Lakes that belong to all of us.