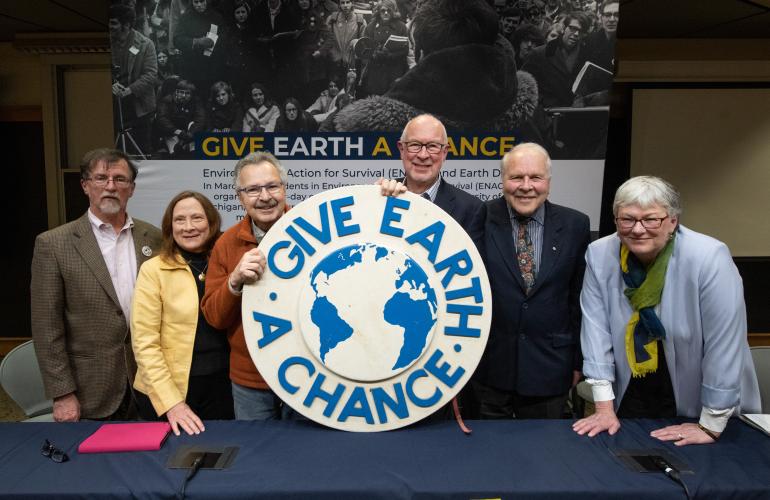 Throughout 2020, FLOW has been remembering and reflecting on one of the most consequential years for the environment in America’s history: 1970. The year of the first Earth Day, in which the U.S. Environmental Protection Agency (EPA) was created, Sleeping Bear Dunes National Lakeshore was authorized, the Michigan Environmental Protection Act became law, and much more — made 1970 a year to remember.

As 2020 ends — a consequential year for other reasons – it’s a good time to reflect on what happened 50 years ago, what has transpired since, and where we’re headed on environmental sustainability, public health, and community justice.

The good news is that the nation’s attack on visible air and water pollution since 1970 has made a noticeable difference. Between 1980 and 2019, nitrogen dioxide air pollution in the U.S declined 65%, sulfur dioxide concentrations fell 92%, carbon monoxide levels fell 85%, and airborne lead levels plummeted 98%.

In 1969, both the Cuyahoga River at Cleveland and the Rouge River at Detroit caught fire, symbolizing the nation’s poor stewardship of surface water and leading to public support for a new Clean Water Act. The fraction of monitored water bodies considered unsafe for fishing has declined since then from 30% to 15%. That’s a step forward, but one that leaves considerable room for further improvement. As former EPA Administrator William Ruckelshaus said in 2010, “Even if all of our rivers are not fishable or swimmable, at least they are not flammable.”

But many pollutants remain at unacceptable levels, particularly in urban areas whose residents are at risk from multiple contaminants in air, drinking water, recreational water, and subsistence fish. This environmental injustice was not a major issue on the Earth Day 1970 agenda. Bringing down pollution levels in these areas and achieving environmental justice for all has been a large part of the Earth Day 2020 agenda.

Gaps in our environmental laws have become apparent. For example, loopholes in the Clean Water Act have allowed agricultural pollution and groundwater contamination to fester. The policy agenda must include modernizing such laws.

A 1970 slogan was “Think Globally, Act Locally.” We’ve proven abler at the second than the first. Citizen power has resulted in many community initiatives from recycling programs to land conservation.

But at the same time, problems that we recognize as global have remained challenges or even worsened. For example, domestic U.S. mercury emissions have plummeted since 1970, but we now know that mercury emitted as far away as Asia can travel on the wind and be deposited in the Great Lakes and inland lakes.

Even more significantly, we have come to recognize greenhouse gas emissions as a threat to the global climate and to humanity. That reckoning should have led to major change in the United States more than 30 years ago, when a prominent scientist warned Congress it was time to act. Reducing greenhouse emissions in one or even scores of countries will not be enough — all must contribute, a difficult feat in a world of diverse peoples and governments. But it must be done. And the United States must lead.

To many alive in 1970, bringing America’s environment back seemed a daunting task. The persistence and courage of millions of citizens forced the government to respond. The lesson for our time is clear. We cannot expect “leaders” in government to take the initiative. Instead, the public must lead them to use their powers for the common good. FLOW’s mission is, and will remain, to help make that happen.

One comment on “From Earth Day 1970 to Today: 50 Years of Lessons Learned and the Path Forward”